Residual load is electricity load (demand) minus generation from variable resources, such as wind and solar. Residual load represents the load that must be supplied by more controllable resources: firm generation (gas, nuclear, etc.), energy storage, and demand response.

For a system operator, peak residual load indicates a lower bound on the quantity of firm generation, stored energy, and demand response that must be available in their system to supply all electricity loads.

As wind and solar are added to our electricity systems, system planners will likely rely on estimates of future peak residual load and how the peak values vary from year to year as crucial planning metrics.

We estimate the peak residual load and how much it varies from year to year as wind and solar generation are added to four example electricity systems. From this, we find that the variability in the peak values changes as more wind and solar are added.

Interestingly, for the three modeled systems that experience their peak electricity usage in the summer months (ERCOT in Texas, PJM in the mid-Atlantic, and NYISO in New York state), adding solar statistically reduces the spread in the peak values from year to year.

These three summer peaking systems show a strong correlation between peak electricity usage and the hottest days. The hottest days are indicated by the largest “daily degree day” values in the below figure.

Thus, by adding generation that correlates with the most extreme peak load hours, electricity systems can become more predictable even if that generation is from a variable renewable resource like solar.

Reducing the spread in the peak values from year to year could possibly make system planning simpler by having more predictable peak residual load values.

We incrementally increased the contributions of wind and solar generation from zero to generation equivalent in quantity to providing 100% of annual load. For each residual load profile, we assessed the spread in the peak values from year to year.

To calculate the spread in the peak values, called the inter-annual variability (IAV), we take the mean of the 10 peak residual load values from each year of data and calculated the standard deviation of these 10 mean values. 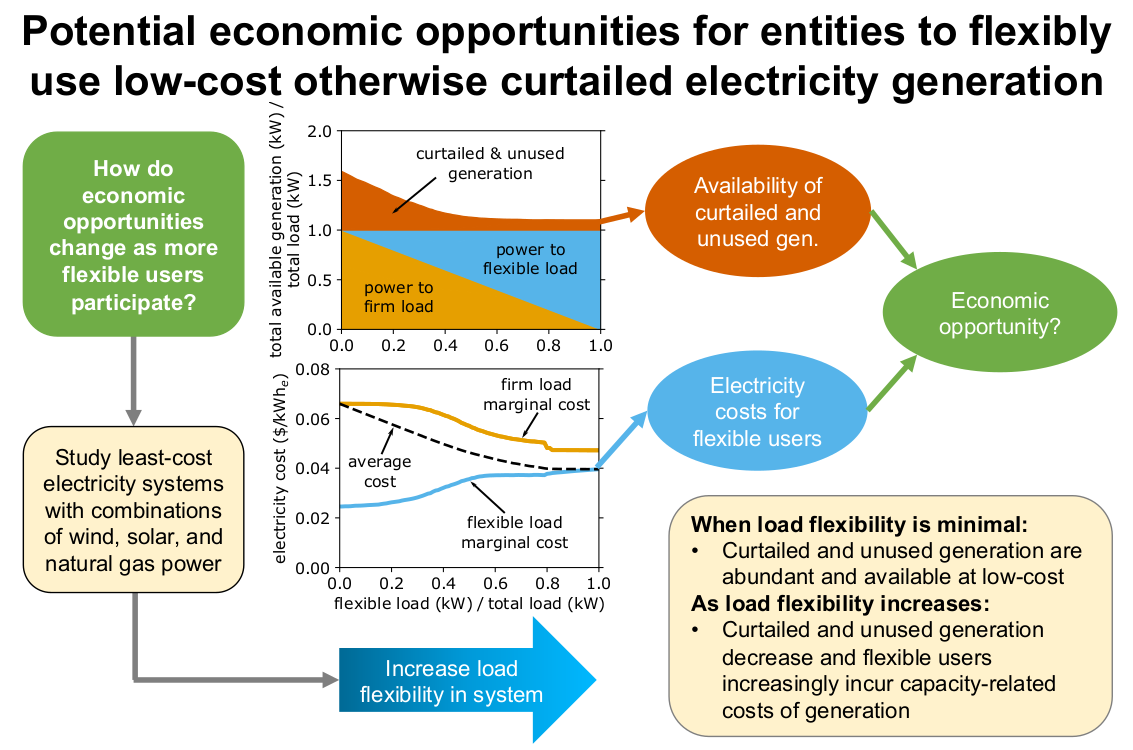 Wind and solar generation are powering more and more of our electricity systems. Along with their zero-carbon electricity comes their variability and uncontrollable power output.

Utilities are increasingly tackling the variable nature of wind and solar power by building energy storage to shift available power from when it can be produced by nature to when it is most needed by the grid.

We asked how the operations of future electricity systems would change if we introduced a small, flexible hydrogen producing load. Is there essentially “free” electricity available to a business who can choose to operate only when the sun is shining and wind is blowing? How much “free” electricity will there be?

One enticing thing about flexible loads is when other electricity uses are pushing the grid to its maximum extent and power costs are high, flexible loads can simply throttle back or even turn off.  This would save them considerable money and could save the grid from needing to expand generation capacity, a win-win situation.

However, if we really push the envelope with vast amounts of flexible loads like electric vehicles and by producing hydrogen, the grid’s generation capacity will eventually need to expand. After all, there is only so much zero-cost and low-cost power available in the original electricity system.

Many more interesting results and all the details can be found in the paper.

I am looking forward to continuing this line of work and further exploring the integration of hydrogen production with low-carbon electricity systems and how both can enable a low-carbon energy transition.